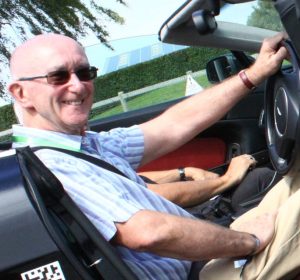 About me, Bill Munro

I'm a writer and the proprietor of Earlswood Press, the imprint through which I publish the books I write. I only publish a few titles, because I want to get them right and that takes time.

I'm known best as an authority on the history of the London taxi, the world-famous 'black cab' – in fact, I'm the official historian of the London Electric Vehicle Company, the only company in the world currently making them from scratch – but London taxis are not my sole interest in the automotive world. During my mid-teens, at school I was actively involved with the British Hot Rod Association, helping to run model drag races and model hot rod and custom car shows.

After my first book, Carbodies - the Complete Story was published I was asked to write a book about the Jeep. During the research for it, I gained an interest in Ferguson four-wheel drive, which emerged as Traction for Sale.
If you want to ask a question or can help in any way, I'd be very pleased to hear from you, so please contact me.

Why the name, Earlswood Press?

When I had finished writing Taxi Jubilee, I realised I needed an imprint under which the book could be published, and I needed it quickly. Earlswood is a district very close to where I live, so that's what I chose.

If you are an author who wants to make sure you have the details about London Taxis correct, I'm happy to advise. Just contact me.

If you are a film, TV or radio programme maker, I will be pleased to work with you on a consultancy basis. For commercial work, such as film or TV consultancy I usually charge a fee, based on a daily or half-day rate. Please do not assume that, as an enthusiast, I will be happy to work for nothing. I won't. However, do call me to see if we can do a deal that suits us both.

Largely forgotten by today's students of industrial and naval history, William Beardmore, Baron Invernairn played a pivotal role in the prosperity of late nineteenth and early twentieth century Glasgow, his adopted city. After the Great War, Beardmore earned the accolade, "The Field Marshall of Industry" as well as a peerage for his great contribution to the output of munitions. In 1919 he changed tack and began developing many different modes of transport, but his failure to deal with the effect on his company of the economic climate of the 1920s brought the business to its knees and he was forced out. He died in 1936, in his eightieth year.

This is a long-term project and I would very much like to hear from anyone with any connections with Beardmore, his wife, Elspeth (née Tullis), or anyone who has an interest in either the Beardmores or the products of the various companies.