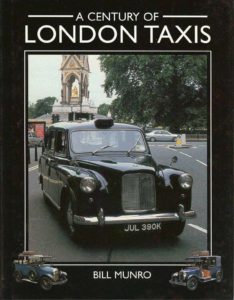 What is the book about?

Quite simply, it's the story of what we now know as the London Black Cab, from its origins in the late 19th century, up to the first two decades of the 20th century.

The first horseless cab in London was the Bersey, which was electric. The very latest models, by law have to be zero emissions-capable, which in practice means they are also electric. Thus the trade has come full circle. And to be honest, good old SEO (search engine optimisation, the tricky thing that finds websites and other stuff) pretty much demanded that I use at least some of the original book's title!

The London taxi has been a familiar sight on the streets of the capital since the early days of the 20th century. It had a slow start, until 1905, when The General Cab Company placed 500 Renault cabs on the streets. The company was based in a massive, purpose-built garage in Brixton, South London. Encouraged by this investment, others entered the trade and it grew exponentially until the Great War. The introduction of the Conditions of Fitness in 1906, which demanded the famous 25ft (7.6m) turning circle prevented many aspiring taxi makers, but it marked the London taxi as unique in the world.

The Conditions of Fitness remained unchanged until 1927. Motor car design had moved on rapidly and few makers thought it worthwhile making taxis for London. In the 1920s only four makes were available and by 1927, only one, the Beardmore was readily available, but expensive.

A change in the Conditions of Fitness allowed the entry of a new model, the Austin 12/4, introduced by dealers Mann and Overton's Garage. Cheap to buy, economical and reliable, it became the most popular cab during the 1930s.

Two new models were introduced in the 1940s; the Nuffield Oxford and the Austin FX3, followed. by the Beardmore MkVII in 1954. all three were finished in standard black paint. When Austin introduced its diesel engine n 1956, these two factors set the trend for the London "black cab" for the future.

The Austin FX4 of 1958, built for Austin by Carbodies of Coventry was the most significant and most recognisable London taxi of all time. It would last in service for 39 years, until replaced by the TX Series in 1997. Its only alternative during the 1960s and early 1970s was the Winchester, which sold in minuscule numbers.

Carbodies became the official maker of the FX4 in 1982. In 1987 the company became London Taxis International (LTI). The FX4 was challenged in that year by the Metrocab, but sales of this GRP-bodied cab were modest compared to the FX4, the availability, sales and service of which were solidly underpinned by Mann and Overton.

In 1997, LTI replaced the FX4 with the TX1. Its successive models, the TXII and TX4 ran until 2017. All the while, the licensing authority, Transport for London (TfL) required ever stronger exhaust emission controls, leading to a regulation requiring all newly licensed taxis in London to be zero-emission capable by 2017. LTI was acquired by Chinese auto maker Geely in 2012 and for the new regulations, introduced a range-extended electric taxi, the TXE. A second new electric taxi, based on the Nissan NV200 van appeared in 2019.

I'd be very interested to hear from you if:

This website uses cookies to improve your experience while you navigate through the website. Out of these cookies, the cookies that are categorized as necessary are stored on your browser as they are essential for the working of basic functionalities of the website. We also use third-party cookies that help us analyze and understand how you use this website. These cookies will be stored in your browser only with your consent. You also have the option to opt-out of these cookies. But opting out of some of these cookies may have an effect on your browsing experience.
Necessary Always Enabled
Necessary cookies are absolutely essential for the website to function properly. This category only includes cookies that ensures basic functionalities and security features of the website. These cookies do not store any personal information.
Non-necessary
Any cookies that may not be particularly necessary for the website to function and is used specifically to collect user personal data via analytics, ads, other embedded contents are termed as non-necessary cookies. It is mandatory to procure user consent prior to running these cookies on your website.
SAVE & ACCEPT
Scroll Up