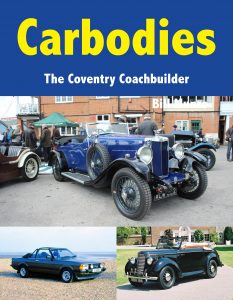 When it was published by Crowood Press in 1997, Carbodies, the Complete Story gained critical acclaim and much interest amongst automotive historians and vehicle owners alike. So much more information has become available since then that could and should be assessed and analysed. It was clear that a new, enhanced edition had to be written, with far more pages and full colour throughout. This is a book for both the serious student of automobile history and the keen classic car owner alike.

As a jobbing coachbuilder in the 1920s and 1930s, the arrival of the MG marque provided Carbodies' owner, Bobby Jones with a reliable source of work and a very welcome and reliable way of expanding the business. Carbodies also supplied makes such as Alvis, Invicta and Railton and made special bodies for mass-produced makers such as Rootes and Rover. During the 1930s, as the big manufacturers adopted pressed steel bodies, Carbodies developed new designs of drophead coupé and sports bodies, with elegant lines and experimented with power-operated hoods.

Carbodies was taken over by BSA in 1954 with the idea of turning it into the body making division of Daimler. Instead, it made just one complete Daimler body, the Majestic, in 6-cylinder and V8 and Majestic Major forms. With the ousting of Sir Bernard Docker from the board of BSA, the new management turned Carbodies into a more general body supplier and converter, producing diverse product lines, convertible versions of Ford and Daimler cars, motorcycle panels, commercial vehicle bodies, body pressings under contract for other makers and domestic washing machines, all alongside the Austin FX3 taxi.

The arrival of a new managing director at the end of the 1970s resulted in two unsuccessful attempts to return to private vehicle conversions, with the Cortina Coupé and the Range Rover Unitruck.

In 1982, Carbodies acquired the intellectual rights to the FX4 from British Leyland and from then on, taxi manufacture would become its sole business. After the failed attempt to produce the Range Rover-based CR6 taxi to replace the antiquated FX4, Carbodies' management began to evolve the FX4, fitting improved brakes, suspension and interior until, in 1997, the chassis of the final FX4 variant, the Fairway Driver became the foundation of a new taxi, the TX1.

This website uses cookies to improve your experience while you navigate through the website. Out of these cookies, the cookies that are categorized as necessary are stored on your browser as they are essential for the working of basic functionalities of the website. We also use third-party cookies that help us analyze and understand how you use this website. These cookies will be stored in your browser only with your consent. You also have the option to opt-out of these cookies. But opting out of some of these cookies may have an effect on your browsing experience.
Necessary Always Enabled
Necessary cookies are absolutely essential for the website to function properly. This category only includes cookies that ensures basic functionalities and security features of the website. These cookies do not store any personal information.
Non-necessary
Any cookies that may not be particularly necessary for the website to function and is used specifically to collect user personal data via analytics, ads, other embedded contents are termed as non-necessary cookies. It is mandatory to procure user consent prior to running these cookies on your website.
SAVE & ACCEPT
Scroll Up